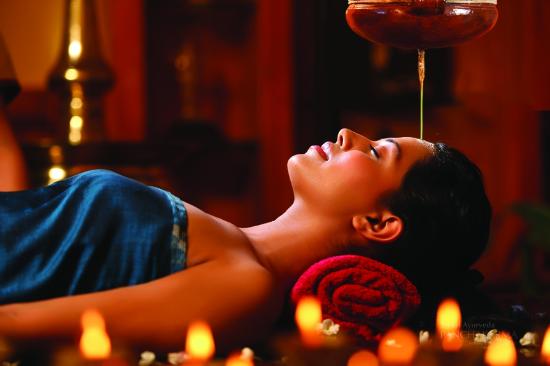 A unique gift from the ancient healing system of Ayurveda is a very special treatment called Shirodhara, one of the most calming relaxation therapies for modern living. It comes from a combination of two Sanskrit words- Shir or ‘head’ and Dhara or ‘stream’. In this deeply soothing process, the scalp and forehead receive a steady and gentle stream of lukewarm medicated herbal oil poured in an ancient pattern stimulating points covering the whole of the forehead. Shirodhara rejuvenates and enlivens the central nervous system that gets clogged with residual stress, worries, erroneous eating and lifestyle habits, and work pressure. It treats various conditions related to the nervous system, and/or conditions rising from a vitiated Vata Dosha. Here we list some invaluable benefits, beyond merely the blissful nature inherent, of undergoing Shirodhara treatment as part of the Ayurvedic Panchakarma program or even as a standalone treatment.

How Is It Done?

A pot, known as a Dharapatra in Ayurveda, with a tiny hole is hung over the forehead of the patient, at a specific distance. The pot is filled with warm medicated liquids which could be herbal medicated oil with various healing qualities, or buttermilk with herbs. The liquid trickles through the hole on to the patient’s forehead at a specific point called Ajna Marma. A band is placed across the forehead to prevent the liquid from entering the eye region. The therapy lasts anywhere between 30-45 minutes.

Why You Must Undergo Shirodhara

The head region holds the pituitary gland, which is also the master endocrine gland. Shirodhara activates and rejuvenates the functions of the pituitary gland which is instrumental in maintaining and improving vital bodily functions. This gland secretes hormones like Prolactin, Adrenocorticotropin or ACTH, thyroid stimulating hormones and growth hormones. ACTH controls the functioning of the adrenal glands which in turn produces the stress hormone called Cortisol. Shirodhara benefits the pituitary gland and helps normalize the secretion of these vital hormones. 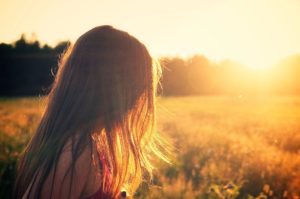 One of the conditions for which Shirodhara is recommended is Insomnia. Shirodhara normalizes poor circadian rhythms. According to a study published by medical experts from Southern California University of Health Sciences, (SCUHS) United States, “Shirodhara done with Brahmi oil for 45 minutes may be beneficial for moderate to severe insomnia.”

3) Controls Functions Of The Senses 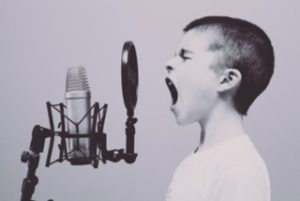 Speaking in terms of Ayurveda, the pituitary gland is also the seat of Vata Dosha (air/space element among the five elements) and some of the sub-doshas like Tarpaka Kapha and Sadhaka Pitta. In Ayurveda, Hridaya (meaning Heart) comprises both heart and mind. This is explained by the fact that Sadhaka Pitta, a type of Pitta Dosha known for managing emotions and emotional triggers, is located in the pituitary region. This also brings out the deeper connection between negative thoughts and negative emotions or positive thoughts and positive emotions.

Shirodhara is strongly recommended for treating anxiety disorders. According to a scientific explanation put forth by SCUH, “researchers also predicted that the effects of Shirodhara in reducing anxiety could be attributed to the somato-autonomic reflex through thermosensors or pressure sensors in the skin or hair follicles via the trigeminal cranial nerve.”

6) Treatment For Migraine or Chronic Headache

According to the World Health Organizations, Migraine headaches are among the top 20 most debilitating health conditions in the world that affects more than 36 million Americans. Migraines are more commonly managed by using preventive medication and avoidance of triggers. But results with western medicines have been less than encouraging. Some of the drugs administered for treating Migraines over a long run are also known to have debilitating side effects like gastrointestinal problems, dementia, weight gain, dry mouth, nausea, among others. Also, the excessive use of analgesics is turning infrequent headaches into chronic ones. Migraine patients are being increasingly encouraged toward positive alternative non-pharmacological therapies like Shirodhara.

According to Vagabhat’s Ashtang Hridyam, an age-old and widely respected and followed treatise on Ayurveda – for treating headaches induced by Vata imbalance, Ghee (clarified butter) can be applied to the forehead and warm milk boiled with Dashamula (a mix of 10 herbs)  should be poured on the forehead.  Even for treating redness of the eyes or heaviness in the eyes, a preparation made from Sandalwood oil and Brahmi oil can be dispensed as part of Shirodhara.

A neural receptor receiving steady stimulation with consistent strength or intensity impedes the receptor from sending impulses through the nerve, a principle that naturally reduces pain impulses. “In (Shiro)Dhara the duration of the therapy is thirty minutes, hence there is prolonged and continuous pressure on the forehead due to the trickling of dhara drava (medicinal liquid),” explains a paper titled ‘Shirodhara In The Management Of Vatika Shirashoola With Special Reference To Chronic Daily Headache: A Review’ published by The International Journal of Applied Ayurvedic Research. “This continuous pressure coupled with the heat of the oil is thought to release the body’s natural pain killers; Endorphins. These endorphins produce analgesia by action on the brain stem.”

8) Shirodhara Works For Treating Other Conditions Including

Immediately after receiving Shirodhara, doctors recommend patients to rest and avoid any activity that involves too much physical exertion or loud sensory stimulation.

Where can you find best Shirodhara therapists?

Nestled atop the beautiful Blue Ridge Mountains, is the award winning Shankara Ayurveda Spa, within The Art of Living Retreat Center, Boone. Lose yourself to the hypnotic beauty of a natural life replete with soul gratifying, rejuvenating Ayurvedic treatments tailor-made to your body constitution and needs, healthy, nutritious meals and lessons in easy-to-do yet deeply calming meditative techniques  and Yoga. There could not have been a better way to let go of the stresses and knots of tension that we carry in our system from work, life situations or personal relationships on a day to day basis. Best place to experience Bliss. 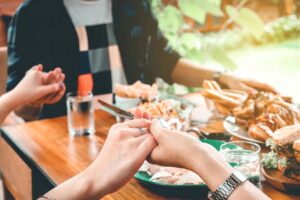 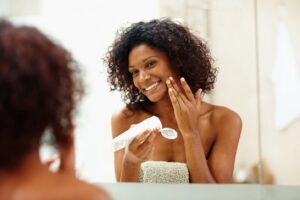 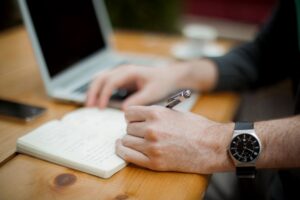